We’ve just received a copy of Dr de Hamel’s latest book: Gilding the Lilly: A Hundred Medieval and Illuminated Manuscripts in the Lilly Library. The Lilly Library is the rare books, special collections and manuscripts library of Indiana University at Bloomington. To celebrate their ‘golden’ 50th anniversary, they asked Dr de Hamel to curate an exhibition and compile a catalogue of their medieval manuscripts. 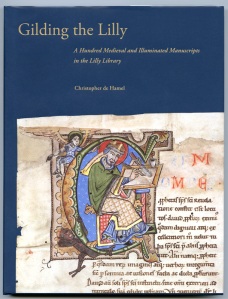 Rather than a catalogue of everything in their collection, or even the hundred prettiest manuscripts they possess, Dr de Hamel selected a hundred manuscripts from the Lilly Library through which to tell the story of book production in Europe from the Late Antique period to the Renaissance. The book proceeds chronologically from a 1st-century Roman tombstone and a tiny 8th-century uncial fragment (only 67 x 70 mm) through some stunning 15th-century Books of Hours to a 19th-century volume containing beautifully painted copies of miniatures from a 15th-century Book of Hours.

A double page or more is devoted to each manuscript with a physical description, indication of its provenance, contents, context and significance  and a colour photograph (often full page). It’s a fascinating glimpse into the collection of a very different manuscript library. I particularly enjoyed learning about how the various items were acquired, principally from the private libraries of two great bibliophiles and collectors, C. Lindsay Ricketts (1859-1941), a calligrapher, and George A. Poole, Jr.  (1907-1990), a printer – very different figures from our own Archbishop Parker.