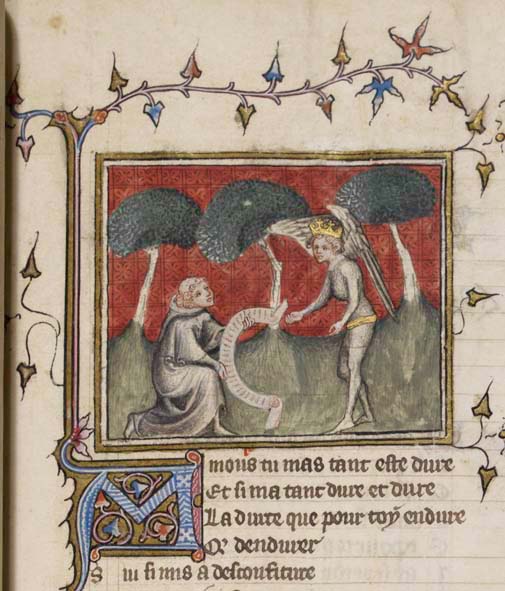 An exhibition is now on at the Musée de Cluny in Paris,  Gaston Fébus et le livre de la chasse, and it contains a manuscript from the Parker Library. The manuscript in question, a highly illuminated copy of the works of the great French 14th century writer and composer Guillaume de Machaut (c.1300-1377), doesn’t actually belong to the library; it’s on loan from American collectors James and Elizabeth Ferrell, in order that it can be made available for scholars to study. The manuscript has been in private hands since it was made and, not long after it was made, probably belonged to Gaston Fébus himself.

Gaston III, count of Foix (1331-1391), Viscount of Béarn and Pyrenean prince, gained a reputation for wealth, political independence and the brilliance of his court. He was given the nickname Fébus (Phoebus) on account of either his golden hair or his handsome features. He was a collector and man of letters, and also author of the Book of the Hunt, a hunting manual dedicated to Philip the Bold (1342-1404), Duke of Burgundy, of which numerous richly illuminated manuscript copies survive.

One of the most lavish is owned by the Morgan Library in New York. It isn’t in the exhibition in Paris – but many images from it are displayed in an online exhibition:

The exhibition at the Musée de Cluny, Musée national du moyen age, is divided into two parts, a selection of manuscripts and objects relating to Gaston Fébus and his Book of the Hunt; and a collection of books that may have been in his library.  It will run until 5 March 2012, and features loans from the British Library, the British Museum, the Louvre, and other institutions. The exhibition will then move to the Musée du Château de Pau, Gaston’s impressive old home, from 17 March until 17 June, although without the Machaut manuscript.