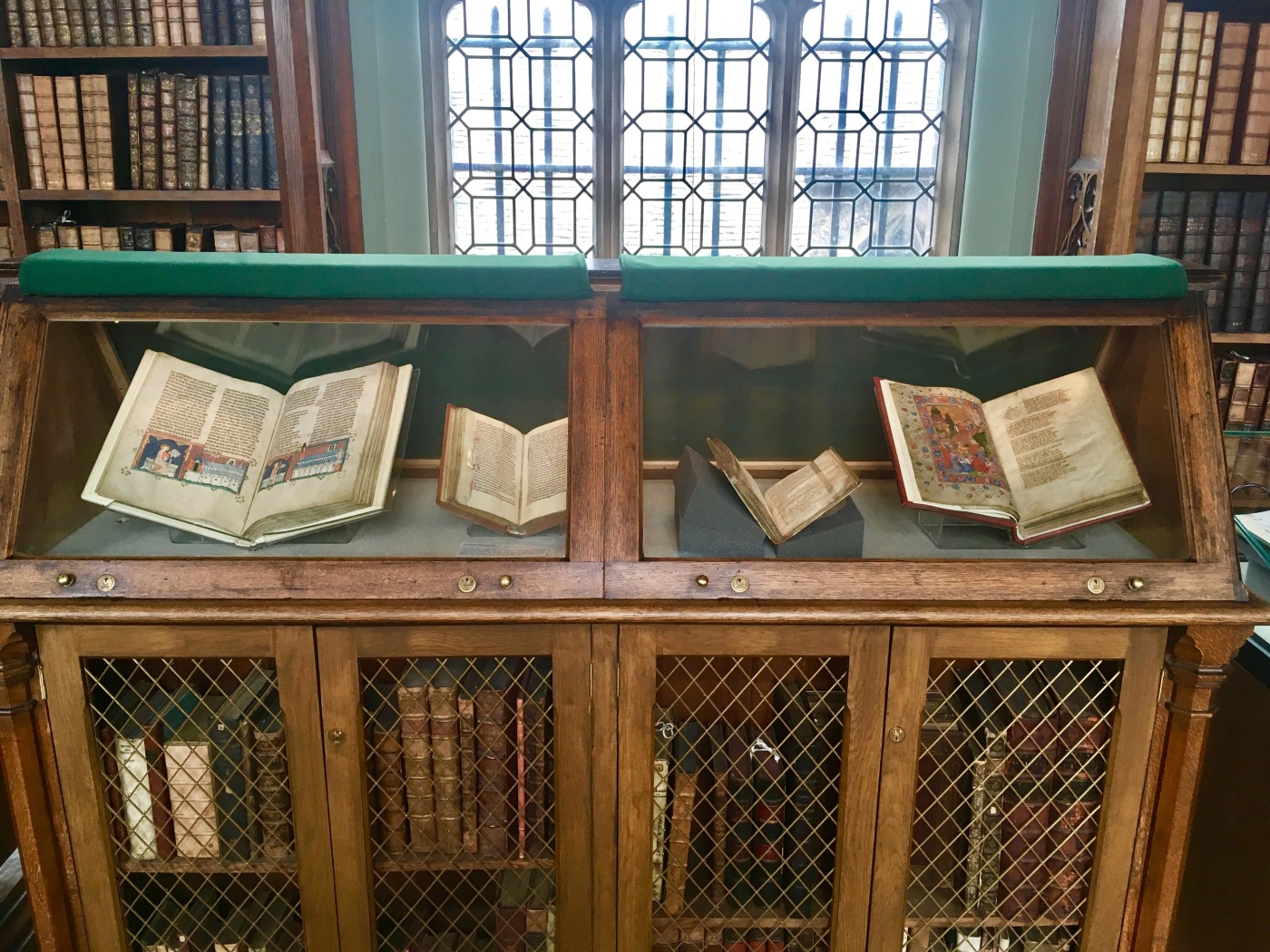 Our second exhibition case is currently dedicated to the study of English literature, which, unlike Theology, was not part of the university curriculum during Parker’s time (and it would have had to wait for another 350 years at least). I focused specifically on post-Conquest material, since we decided to keep our Anglo-Saxon books in a separate case. The four volumes I chose conveniently run in chronological order, from a thirteenth-century Apocalypse in Anglo-Norman to our copy of Chaucer’s Troilus and Cryseide from the second quarter of the fifteenth century.

I chose the Corpus Apocalypse as the first item because of its beautiful illuminations, and, more importantly, its language. Whilst medievalists are very familiar with the trilingual nature of English society during the Middle Ages, not all our visitors are aware that Anglo-Norman was one of the spoken vernaculars of England during this period. This is usually an excuse to talk about the polarised relationship between the French of the conquerors and the English of the conquered, as Ian Short suggested, in contrast with the omnipresent Latin, symbol of the authority of God and, most importantly, of the Church. The opening I have chosen strategically illustrates some basic scribal practices, such as the ruling of books, the erasure of text, and the use of the cloister as a possible setting for writing, thus allowing the viewer to visualise how our manuscripts were made.

The Apocalypse is then followed by the earliest surviving copy of Ancrene Wisse, a favourite of current university reading lists on medieval English texts. It is what we amicably refer to as a ‘brown manuscript’ – i.e. somewhat underwhelming to the untrained eye – and I have used this item to show how medieval reading practices sometimes resonate with modern habits, such as the underlining that you can see on the recto of the opening, and some ‘maniculae’ (literally meaning ‘little hands’) highlighting important passages – in short, the precursors of asterisks, exclamation marks, and the like in the margin of our own textbooks!

I then felt I should flaunt some of our classics – a copy of Piers Ploughman, and Chaucer’s Troilus. Piers shows some water damage over the edges, which is an excellent occasion to raise conservation concerns with our visitors, and explain why, as special collection librarians, we work under certain conditions to ensure our rare material is kept safe. Moving on to Chaucer, well, it speaks for itself. Yet I like to remind our visitors that this manuscript was not acquired by Parker because of his appreciation of Chaucer’s poetry per se – quite the opposite: he believed it to be a copy made for the king, and collected it as a ‘royal manuscript’ – little did it matter that it contained Chaucer rather than any other text! 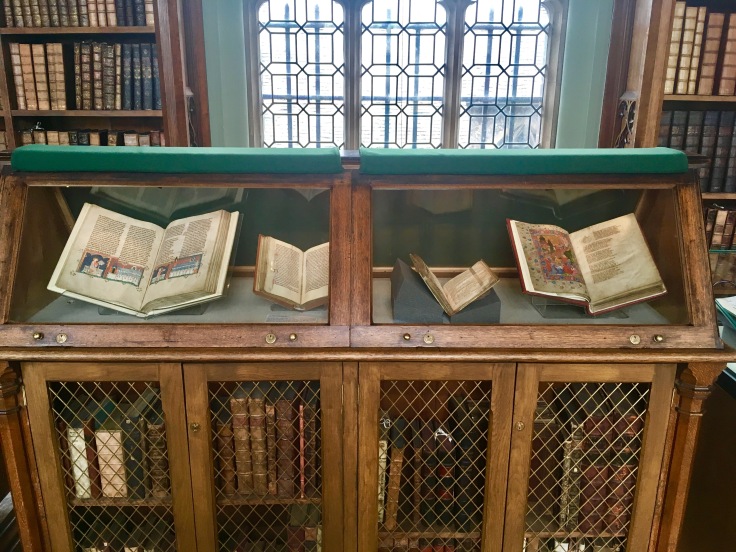 With no less than 106 pictures, this is one of the finest fourteenth-century illustrated copies of the Apocalypse, written in Anglo-Norman. Although England is often referred to as a medieval trilingual society, only a minority of the population could speak this variant of continental French. Moreover, throughout the Middle Ages it never came to displace English, and by the fourteenth century it was considered as an accomplishment that was in reality fast disappearing. By the end of the century, shifting attitudes to the two vernaculars of England also coincided with the increasing richness of Middle English literary composition, as witnessed in Chaucer and Gower’s works.

The Ancrene Wisse or Ancrene Riwle is a treatise on the religious life intended for anchoresses or nuns. To this day, uncertainty surrounds its origins and authorship, although it was possibly written by a Dominican friar in the West Midlands during the 1230s. Alternatively, authorship has been assigned to an Augustinian canon, also writing in the same area in the first third of the century. This copy is one of the earliest that have survived, which is especially valuable considering that the text represents one of the first examples of Middle English prose after the Norman Conquest, and, as Cate Gunn has put it, ‘anticipat[es] the vernacular spirituality that developed in the fourteenth century’.

Piers Ploughman is a Middle English alliterative allegory meant to inspire religiosity, and educate its medieval audience to key theological principles through the journey of its Christ-like homonymous character. Popular throughout the Middle Ages, it attracted special attention at the time of the Peasants’ Revolt of 1381, which similarly denounced the clergy’s corruption and inadequate pastoral care. Although it is no deluxe copy, it was collected by Parker himself, possibly as an example of popular vernacular religious literature. Here you can also see his hand paginating the book’s leaves, written in a characteristic red crayon.

Although the Parker Library is yet to acquire a copy of the Canterbury Tales, this copy of Troilus is usually referred to as the most beautiful surviving copy of the poem. It was planned as a luxury edition intended to have over ninety illustrations; however only the full-page frontispiece was painted, with blank spaces left at the positions intended for the other pictures. It is thought that the man reading from the pulpit represents Chaucer himself, and that the prominent male figure dressed in a gold-embroidered costume was the likely patron of the book. Although this figure remains unidentified, Parker believed this manuscript to be a royal commission, which would make Richard II a candidate for patronage. This was also the likely reason why Parker collected the book in the first place, rather than for the quality of the text itself (now the main source of modern editions).