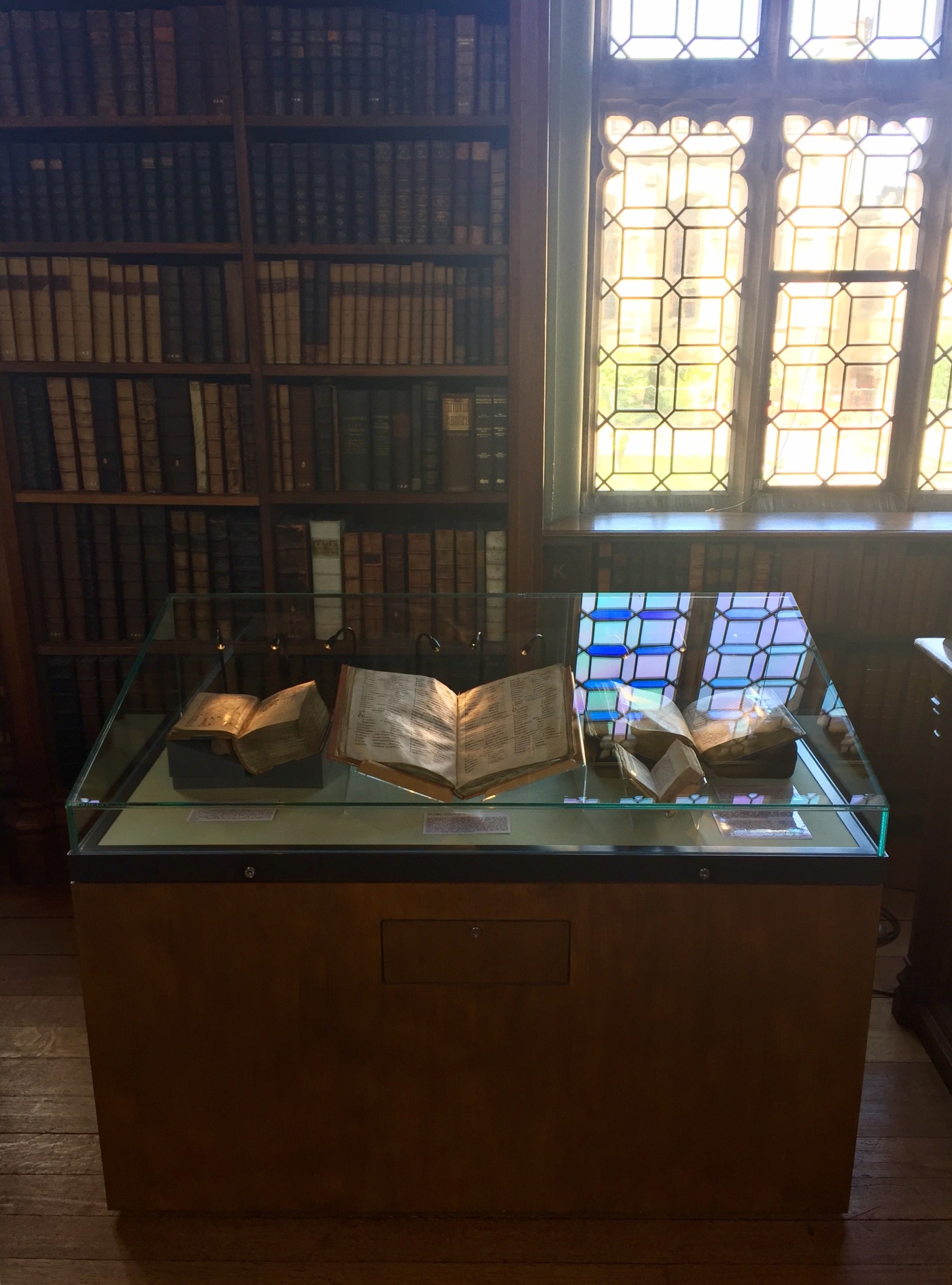 The Parker Library is celebrated as one of the finest libraries of its kind in the world. Its holdings of medieval manuscripts and early printed books constitute a resource of unparalleled international importance for the study of Britain’s premodern past, and a repository of historical materials of exceptional importance to our nation’s culture and heritage.

Of special significance for scholars of Anglo-Saxon, Norse and Celtic is the library’s treasure-trove of extremely early manuscripts. The Parker Library is home to significant portion of all surviving manuscripts older than the year 800 in British collections, including the world-famous Gospels of St. Augustine (MS 286) and our 8th-century Northumbrian Gospel Book (MS 197b). Furthermore, we also hold about a quarter of all extant manuscripts in Old English; our holding is surpassed only by The British Library and The Bodleian. Our shelves hold many of the most celebrated volumes in the entire canon of all surviving Old English manuscripts, such as the earliest text of the Anglo-Saxon Chronicle, today known as The Parker Chronicle (MS 173), the Aethelstan copy of Bede’s Life of St. Cuthbert (MS 183), and The Corpus Glossary (MS 144). The collection contains several of the translations from Latin made at the instance of King Alfred, including St. Gregory’s Dialogues (MS 322) and his Pastoral Care (MS 12) and Bede’s Ecclesiastical History of the English People (MS 41), while the biblical translation of Abbot Ælfric is represented by The Bath Old English Gospels (MS 140) and MS 449, which contain his Grammar and Glossary. The Parker is one of the principle sources of the Homilies of both Ælfric and of Wulfstan (MSS 198 and 190). Our collections also include rare examples of pre-Conquest laws (in the second half of MS 173 and in MS 383) and of early English monastic rules (in MSS 178, 191 and 201). We also hold the earliest surviving example of polyphonic music in the eleventh-century Winchester Troper (MS 473).

The Parker Library acquired this magnificent collection through the benefaction of our namesake, Matthew Parker (1504-75), Archbishop of Canterbury under Elizabeth I and the greatest of the 16th-century English antiquarians, who bequeathed some 600 medieval books bequeathed to the College in 1575. This collection forms the heart of the Parker Library today; it represents the oldest intact private library in the world and enduring monument to Parker’s extraordinary achievements as a book collector, and a testament to his extraordinary generosity as an institutional benefactor and a sponsor of learning.

The explanation for the presence of so rich a collection of early English medieval manuscripts, and particularly such an extraordinary number of manuscripts in the Old English language, in Parker’s collection is foundational to Parker’s reasons for assembling his whole library. When Queen Elizabeth appointed Parker her first Archbishop of Canterbury, he was charged with a mandate to establish an English Church which would be utterly secure, legal and completely irrevocable. To this end, Parker’s sought to justify the ‘new’ English Church by referring to historical precedent; looking far back into early English history he argued that the original missionaries to Anglo-Saxon England had always intended to set up an independent English Church, speaking the English language and under the authority of the king, not the pope. That is why the Parker Library was formed; to support Parker’s interpretation of history and to justify the ‘new’ English Church.

Matthew Parker was a man of many talents, as witnessed in the many academic positions and ecclesiastical offices that he held at local and national levels over the course of his lifetime, not only as a theologian and later a prelate, as a scholar and an antiquarian, but also a translator and a publisher. However above all else, he was lifelong bibliophile, a passionate book collector, and he used his prodigious talent for book collecting to gather a magnificent library that would furnish tangible proof of incontrovertible precedent for each the clauses of the recreated Anglican Church. In 1568 Parker obtained a license from the Privy Council to gather into his own possession any “auncient recordes and monuments” from the old scattered monastic libraries which would provide evidence of the history of the original English religion. This of course meant especially those which were from or were concerned with the Anglo-Saxon period, and of particular importance for Parker were manuscripts in the English language, particularly those that showed or suggested that the vernacular was used rather than Latin in the religious life of the Anglo-Saxons. Nearly every one of Parker’s books was gathered for that reason, and it is for this reason that the library includes so large a section of early English medieval manuscripts. 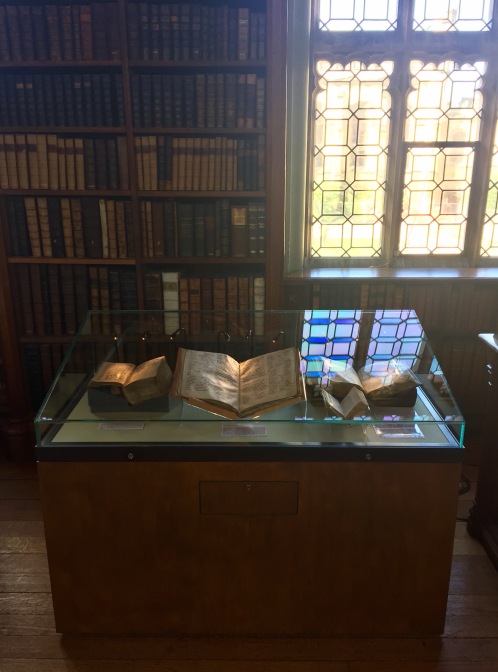 This stout little book comprises a portable one-volume compendium of a Psalter and a Breviary for daily use by an eleventh-century bishop travelling around his diocese. Both historical tradition and internal evidence suggest that the manuscript was made in Worcester for Saint Wulfstan (c.1008-1095), bishop of Worcester 1062-95. Wulfstan was canonised by Innocent III in 1203. He is patron saint of vegetarians. The frontispiece displayed here shows King David as a harpist, playing music on a seven-stringed Anglo-Saxon harp, facing the opening of the Psalter, whose text (Psalm 1) begins: ‘Beatus / vir / qui / non / abiit / in consilio impiorum …’ “Blessed is the man who does not abide in the company of the ungodly…”.

The Corpus Glossary is a list of words with synonyms in Latin, Greek, and Old English, arranged in more-or-less alphabetical order by the words’ first two letters. The manuscript’s importance lies in its inclusion of Old English, of which this volume is an early witness. Although this manuscript itself is quite short, in addition to the famous ‘Glossary’, the volume includes two supplementary texts, both grammatical in subject: a copy of the ‘Interpretations of Hebrew and Greek Names’ and an excerpt from the second book of Priscian’s Institutiones grammaticae, copied at a later date. Entries on the left-hand page of the opening shown here offer definitions for a number of book-related words, among them, in the left hand column, “Bibliotheca” or ‘Library’, here defined as a “librorum reposio” or ‘a repository of books’; while other words, such as “bitricius”, are given with their Old English equivalents, in this case, “stoepfaeder” or ‘step-father’.

A TESTIMONIE OF ANTIQUITIE: SHEWING THE AUNCIENT FAYTH IN THE CHURCH OF ENGLAND TOUCHING THE SACRAMENT OF THE BODY AND BLOUDE OF THE LORD HERE PUBLIKELY PREACHED, AND ALSO RECEAUED IN THE SAXONS TYME, ABOUE 600. YEARES AGOE. (S.P. 281 [1])

This is the first book printed with Anglo-Saxon types. It is an edition of Ælfrician homilies and related materials printed as part of Parker’s programme to use Anglo-Saxon scholarship to solidify the doctrinal and institutional position of the Church of England. The Testimonie, along with the other Old English imprints that Parker were intended to show that the Church of England shared the beliefs of the ancient Saxon church, and thus had a pedigree that was both long and insular. The first Anglo-Saxon type designed for Parker – that which was used to print the Testimonie – had twenty-six sorts, and was based on Old English manuscript models, probably of the eleventh century. The book is here open to the beginning of the homily “In die Sancto Pascae”, with the Old English appearing on the left and a facing-page modern English translation. The layout is clear enough to allow a reader to compare the two versions and presumably, therefore, to learn something of the language.

Annotations of a text can narrate histories of their own, as witnessed in this collection of Old English Homilies. While many later readers have left notes in the margins which attest to their understanding of Old English at a time when it was no longer spoken, the opening displayed here shows annotations which indicate the manuscript’s role in the history of the early printing of Old English. On the right hand page we see the opening of the same homily as that printed in A testimonie of antiquitie, also displayed here – whose text begins ‘Men ða leofostan gelome eoƿ is gesæd’. The number ‘19’ can be seen next to the opening line which corresponds to the page with the same homily in the printed edition.