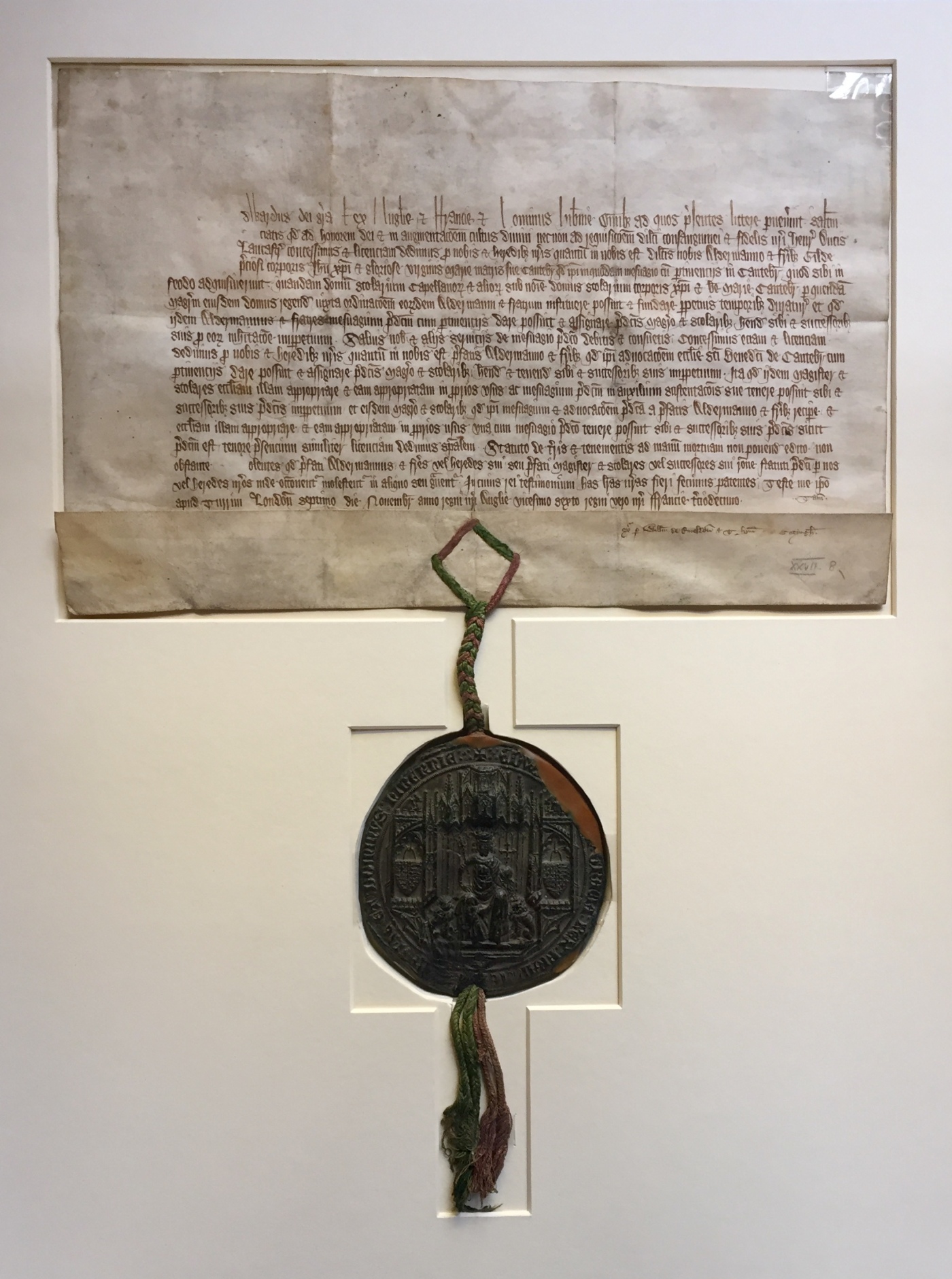 The college’s foundational document has been on display since the start of the year as part of the current ‘Town and Gown’ exhibition, due to run until March. The historic link with St Bene’t’s church, attested in this document, is this year celebrated anew in the year of St Bene’t’s millennium.

May you know that – to the glory of God and the increase of divine worship, and also at the petition of our beloved and faithful kinsman Henry Duke of Lancaster, we have granted and given a license on behalf of ourself and any heirs whomsoever we may have, to our beloved brothers and to the Alderman of the guild of the precious body of Jesus Christ and of his mother the Virgin Mary in Cambridge – saying that they have acquired for themselves through a treaty a certain house of scholars, chaplains and others, under the name of the College of Corpus Christi and the blessed Virgin Mary, and that this College is to be governed likewise by a certain Master according to the ordinance about to be confirmed of the Alderman and brothers, that they might form an institution and be secure for all time, and that this same Alderman and the brothers be able to give and assign the aforesaid dwelling with its appurtenances to the Master and scholars for their own perpetual habitation and the habitation of their successors, reserving also for ourself the other due and customary obligations from the said messuage.

We also grant and give a license on behalf of ourself and any heirs whomsoever we may have, that the aforesaid Alderman and brothers may be able to give and assign the avocation of this same church of St Benedict in Cambridge with the appurtenances belonging to it to the aforesaid Master and scholars for their perpetual possession and that of their successors. We also grant that the Master and scholars be able to appropriate and have the benefit of the Church and aforesaid dwelling to sustain their needs and those of their successors perpetually, and also we grant to the Master and scholars that they be able to take the dwelling and the Advowson aforesaid from the aforesaid Alderman and brothers, and that they be able to appropriate the Church, and have the benefit of that appropriation – they and their successors – with the dwelling, for their own use. Likewise by the tenor/intent of these presents we have granted a special licence, the Statute issued concerning lands and tenements being placed in Mortmain notwithstanding, not wishing that the aforesaid Alderman and his Brethren or heirs, or the aforesaid Master and Scholars or their successors should be molested, troubled or harmed by us or our heirs in any way by reason of the aforesaid Statute.
In testimony of which I have made these letters patent with my own image at the Tower of London.